What Jesus Did and Why

​Jesus said that we must believe that “I am He”. What is it that Jesus did, and why did He have to do it?

But why do we need a mediator between us and God? There must be a separation between us and God for us to need a mediator.
But what has caused this separation? If you read Isaiah 59:2, this Old Testament prophet writes about the cause of separation:
"But your iniquities have made a separation between you and your God, And your sins have hidden His face from you so that He does not hear."
The prophet says that our iniquities (sins) have created this separation. It our sins that God hides from His face. This puts us in quite a predicament.
In fact, we must ask the question, is there anything that can save us?

The New Testament teaches us that the Gospel has the power of God to save us.  Read Romans 1:16:
"For I am not ashamed of the gospel, for it is the power of God for salvation to everyone who believes, to the Jew first and also to the Greek."

The Gospel? What is the Gospel?  The word itself means good news, but lets continue to let the Bible interpret itself.  Read I Corinthians 15:1-4:
"Now I make known to you, brethren, the gospel which I preached to you, which also you received, in which also you stand, by which also you are saved, if you hold fast the word which I preached to you, unless you believed in vain. For I delivered to you as of first importance what I also received, that Christ died for our sins according to the Scriptures, and that He was buried, and that He was raised on the third day according to the Scriptures."

​Notice the Gospel has three main statements:  Here is the Gospel in picture form: 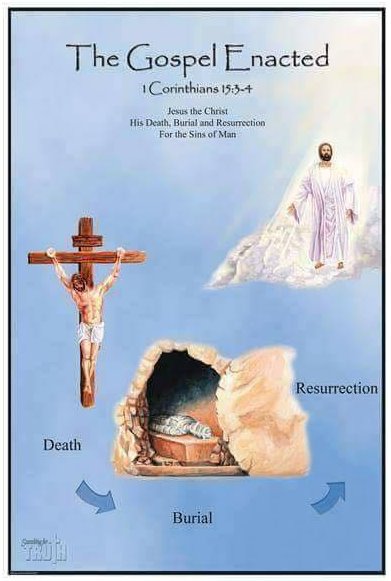 Why did Jesus have to die, be buried, and rise from the tomb in order to save us?

The apostle Paul writes that we needed the blood of Jesus (which is representative of His death) in order to be redeemed.
Read what he wrote in Ephesians 1:7: "In Him we have redemption through His blood, the forgiveness of our trespasses, according to the riches of His grace."

It is a wonderful thing to have God forgive our sins.  In fact, God desires to forgive us.  He wants to take away our sins.
Read how Jude describes it.  "Now to Him who is able to keep you from stumbling, and to make you stand in the presence of His glory blameless with great joy." God wants to present us blameless, or faultless! Jesus takes care of a huge problem we humans have – and that is our SIN problem. Because of Jesus’ death, He redeemed us from our sins! (Jude 24)

But after Jesus was buried, He rose from the tomb alive. Why did He need to resurrect from the grave? Because He came out of the grave alive, Jesus took care of a second problem all humans have – a DEATH or GRAVE problem. The apostle Paul describes how Jesus took care of our GRAVE problem.
Read I Corinthians 15:20-23: "But now Christ has been raised from the dead, the first fruits of those who are asleep. For since by a man came death, by a man also came the resurrection of the dead. For as in Adam all die, so also in Christ all will be made alive.  But each in his own order: Christ the first fruits, after that those who are Christ’s at His coming."

Notice the two things that the Gospel brings us as you read II Timothy 1:10:
"...but now has been revealed by the appearing of our Savior Christ Jesus, who abolished death and brought life and immortality to light through the gospel."

The Gospel brings to us:
The apostle Paul puts it another way in Romans 5:10: "For if while we were enemies we were reconciled to God through the death of His Son, much more, having been reconciled, we shall be saved by His life."

Through His death, we were reconciled! Through His life we are saved! Those are LIFE and DEATH words! That is GOOD NEWS!
There is still something that we need to ask: How do I get in on the Gospel? How can I be saved through the Gospel?

Let’s continue the study and see how the Bible answers those questions by clicking on the picture below.